This post was last updated 7 years 5 months 2 days ago, some of the information contained here may no longer be actual and any referenced software versions may have been updated!

If you upgraded Magento to version 1.9.2 to fix the recent (July 2015) security vulnerabilities your Magento shop now has a bug affecting static blocks.

Magento CE 1.9.2.0 released on the 7th of July 2015 introduced a bug that causes cached static cms blocks to display incorrectly. An error in the Core application code caches the static block data with a non unique cache identifier. This means that the first static block to be cached will quite likely then be displayed when further static blocks are requested from cache resulting in the wrong content being displayed.

This bug has been registered with Magento as issue number 7817 and as of the time of writing an official patch has not been issued.

The Magento community responded to the issue coming up with various workarounds and fixes, the simplest of which is to disable the Blocks/Html output cache in Magento. There is also code available to extend and patch the offending Magento core code as well as a free module that modifies the cache keys used for static blocks via an observer that I have confirmed fixes the behaviour caused by the bug. 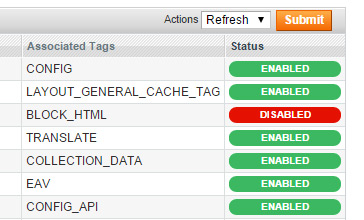 So what should you do? If you can disable the blocks HTML output cache and wait for the official patch from Magento then this is an acceptable short term quick fix that will resolve the problem.

In the long term, until a Magento patch is released and keeping all your caches enabled is important to you then install and test the Rkt_Sbcache module. It implements the workarounds discussed by the community changing the cache key of static blocks via an observer.

This bug highlights the importance of testing new release code and the benefits of waiting for an incremental release of an update before upgrading. It also stresses the importance of thorough testing with a system that mirrors your live environment. I thought I had tested this version thoroughly, but I did all my testing on a development server with caching disabled and whilst I did test on a staging server with caching enabled I was not thorough enough to identify the duplication of static blocks – doh!

It is reassuring to know that the community is actively supporting Magento and that for CE users information is readily available to help workaround or fix a bug like this.

This site uses Akismet to reduce spam. Learn how your comment data is processed.

This website uses cookies to improve your experience while you navigate through the website. Out of these, the cookies that are categorized as necessary are stored on your browser as they are essential for the working of basic functionalities of the website. We also use third-party cookies that help us analyze and understand how you use this website. These cookies will be stored in your browser only with your consent. You also have the option to opt-out of these cookies. But opting out of some of these cookies may affect your browsing experience.
Necessary Always Enabled
Necessary cookies are absolutely essential for the website to function properly. This category only includes cookies that ensures basic functionalities and security features of the website. These cookies do not store any personal information.
Non-necessary
Any cookies that may not be particularly necessary for the website to function and is used specifically to collect user personal data via analytics, ads, other embedded contents are termed as non-necessary cookies. It is mandatory to procure user consent prior to running these cookies on your website.
SAVE & ACCEPT